I implore you. Please go and get some formal education in fitness. 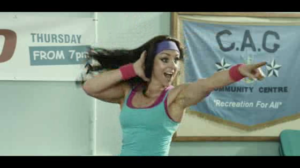 I was one of those who thought my dance degree was enough background to go into the fitness industry, and to be fair in terms of the dance aspect I was perhaps over-qualified. You might not have any background at all other than attending a few classes with your non qualified instructor. I did one day workshops, several of them, several follow up networkings with instructors licensed in the same brand. Until I was told by a qualified fitness instructor I did not know it was not safe to lift your arms above your head and move your feet at the same time without gradually warming up for 5 minutes beforehand – the reason for this is that it can shoot the heart rate up prematurely by the way.

The one day workshops I did never covered the practicalities of a safe warm up or cool down. It never covered the difference between dynamic and static stretching nor stated that static stretching should be left until the cool down. It never covered screen and safe at the start of class. It never covered modifications for people with specific health flags such as high blood pressure, pregnancy, asthma, arthritis, heart problems, back issues, obesity, being underweight and so on and on. There are a lot of brave people out there who exercise to tackle their obesity and this one day workshop didn’t mention it. You’ll probably find that the vast majority of your clients have at least one health flag and they’re coming to your class to try sort it out. Not many people out there who start exercising are 100% healthy. But not one of the one day workshops I attended ever mentioned it.

Because there simply isn’t enough time to cover all this information in a one day workshop. Or the next level workshop after that. Because these companies in majority are only interested in selling their brand, and handing out licenses to anyone who pays for them.  Because technically, they’re not obliged to cover the basics either.  And as a result, people like you (and me, before now) maybe out teaching this brand and unintentionally doing more damage than good. Word gets round that the brand isn’t good and classes numbers die out – not necessarily because of your class, but maybe because of one individual who did not care to do their research and made one mistake. Bad word of mouth travels round faster than good.

And yes you might think “Well they’re REPs accredited, so that must mean the programme is good” – eh, not necessarily. While the content of the class maybe sound, it’s the low standards of passing and the little to no prerequisites in order to sign up that are a huge problem, as there are people out there who do not care about the general well being of their clientele, again, someone who didn’t do their research, or obtained an official fitness qualification. The fitness industry remains unregulated. Anyone can set up a fitness class and answer to no one.

To put it another way, a more blunt way, would you let an electrician perform open heart surgery on you? 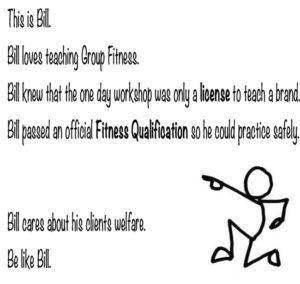 It astounds me that it is possible to work independently in health and fitness without any formal qualifications, yet you need years of training to become a doctor or a nurse. How is this acceptable? Why do people put their own welfare into the hands of the uneducated? (Because people assume that the individual they’re paying has all the knowledge and skill behind them to deliver the service safely.)
Injuries can happen in anyone’s class, but could your conscience handle “I might have been able to do better to maybe prevent that.” Or could you say that you 100% provided the best duty of care to that client? Or are you happy to take someone’s hard earned cash once they sign your waiver?

The one thing I have to thank the one day workshop for is that if I didn’t do it, then I wouldn’t have gone on to help people the way I do now.
If you love what you do, get the piece of paper. Expand on your knowledge, constantly refresh as the industry evolves and be the best that you can be.  Do your one day workshops after you’ve covered the basic groundwork to practice safely.

If you don’t want to invest in a formal fitness education then do us all a favour and look for other means. One that won’t potentially damage someone (If there is such a thing!).

This website uses cookies to improve your experience while you navigate through the website. Out of these cookies, the cookies that are categorized as necessary are stored on your browser as they are essential for the working of basic functionalities of the website. We also use third-party cookies that help us analyze and understand how you use this website. These cookies will be stored in your browser only with your consent. You also have the option to opt-out of these cookies. But opting out of some of these cookies may have an effect on your browsing experience.
Necessary Always Enabled
Necessary cookies are absolutely essential for the website to function properly. This category only includes cookies that ensures basic functionalities and security features of the website. These cookies do not store any personal information.
Non-necessary
Any cookies that may not be particularly necessary for the website to function and is used specifically to collect user personal data via analytics, ads, other embedded contents are termed as non-necessary cookies. It is mandatory to procure user consent prior to running these cookies on your website.
SAVE & ACCEPT